This will hopefully be the first of many posts chronicling my love for baked goods.
A suite-mate of mine is moving out and not returning for the Spring Semester, so we had a going away party. Of course, I made cupcakes. 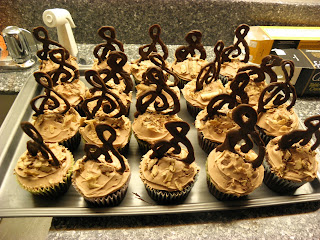 Aren't they beautiful!? They looked a lot better in person, and tasted amazing. These are chocolate cupcakes with vanilla frosting hinted with milk chocolate, covered with crumbled chocolate creme pirouettes and semi-sweet chocolate S's for Stephanie, the girl whose party it was.
The recipe for the frosting was one I made up in a pinch after an incident with caramel. Originally the plan was the have caramel in the frosting, but the second it hit the frosting, it solidified and was crunchy and gross. So, a few hours before the party making these cupcakes, I ran back out to the store, got more frosting, and tried again with something new.
I used one can of vanilla frosting with 3/4 a Giant Hershey Bar, melted down, to produce a beautifully light but sweet and tasty frosting for my cupcakes.
Then I crushed the pirouettes in a bag and lightly covered the tops with them, sometimes pressing them into the frosting a little so they would stay. 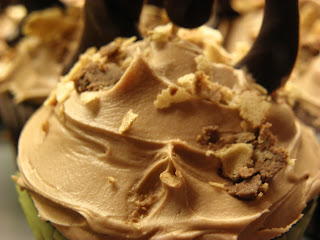 It was difficult to get the S's in place, but eventually we got them all in and they were beautiful!
My next adventure: Cake Balls! I recently purchased Bakerella's new book, and am SO looking forward to trying out cake balls! I've also been following the blog on her website for a while now, so I pumped to maybe try some of those recipes too!
Posted by Loretta at 12/15/2010 12:31:00 AM