For New Year's I went to Boston and spent the holiday with Steve and crew. New Year's Eve we went to Boston's First Night and walked around looking at the ice sculptures with Mike and his girlfriend Sam. It was a lot of walking, and eventually we decided we just wanted to go home and drink.

Steve's roommates Kyle and Larae had been home all night with their friends Alex and Sam brewing beer and watching TV, so when we got home around 11:30, we turned on the ball dropping special with Dick Clark.
Midnight hit, and there was New Year's kissing all around. I had never had a New Year's kiss before.. it was awesome! Not only because it was something I had never experienced, but it was with the amazing man that I love.
Eventually everyone went home and we retired to Steve's room for the evening. Overall it was a fantastic weekend. 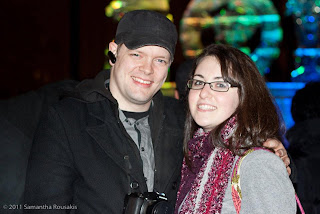 Steve came down to CT for this past weekend.. he got here Friday night and we spent the evening watching Friends and relaxing.
Saturday we started by going to see Bradley (the little boy I babysat all summer) and his parents. I hadn't seen them since August! I had truly prepared myself for Bradley not to remember me, but he totally did, which was super exciting! By the end of our visit he was cuddled up in my lap. I love that little boy.
From there we went to Staples so Steve could see if they had something he needed for his broken computer chair and so he could meet Cisco. After chatting with him for a bit we headed off to the Trumbull Mall so Steve could try on some sunglasses so he could decide which ones he is going to get since he is ordering them online.
We went home, had dinner with my parents, and then went to my aunt's house for dessert and a movie. We watched Secretariat.. awesome movie. My Aunt Claudia and I made this Reese's peanut butter cup ice cream sauce.. it was SO good. There's still some left.... I can't wait to eat it again tomorrow, not gonna lie.
Sunday we just bummed it up. Watched Friends, ate food. Not much else, but it was nice and relaxing.

I just need to take a second to talk about Steve. Starting this new year with him and getting to know him for the past five months I cannot believe sometimes how lucky I am to have him. He is so good to me, and he is everything I have ever wanted in a man. I love him so much that I can't even describe it. As my friend Julie would say, ::heavy sigh::. :)
Posted by Loretta at 1/10/2012 03:07:00 AM