I find that I have not been as good about updating as I would like to be... surprise, surprise.

A lot has happened over the last month! Shortly after my last post, Steve and I went on vacation to visit his dad and sister in North Carolina. I got to ride a plane for the very first time, and it was the farthest I had ever traveled! Here are some pictures from the trip: 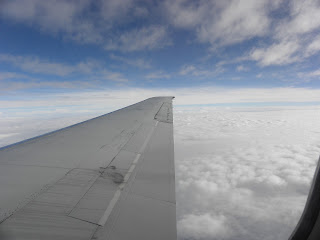 The view out my window on my very first plane ride! 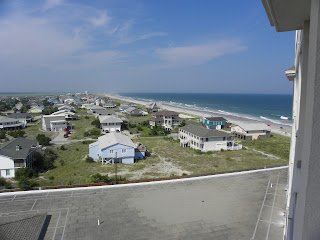 The view of Wrightsville Beach from our absolutely gorgeous hotel. 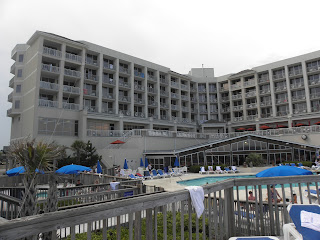 Back view of our hotel! 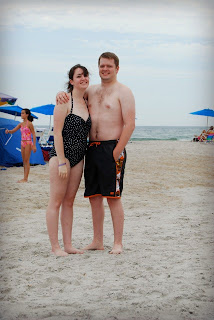 Steve and I on the beach the second day of our trip. We arrived Friday afternoon at the hotel and were there until Sunday afternoon. It was short, but still one of the best trips of my life! 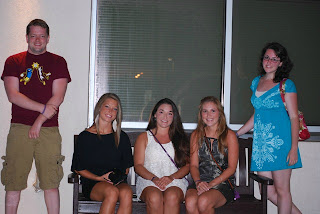 Right before heading out to dinner Saturday night! While there, we got to meet Steve's dad's girlfriend Tracy and her daughters. Pictured here from left to right: Steve, Shannon (Steve's sister), Jewelean (Tracy's daughter), Ariel (Tracy's daughter), and me! 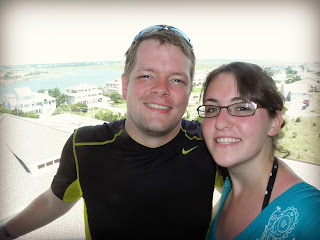 Sunday morning before heading off to the beach and pool, horribly sunburned from the day before... 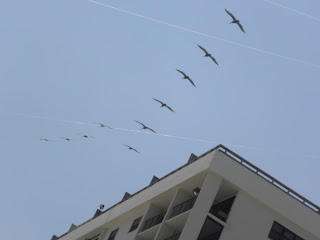 A flock of pelicans flying over the hotel.

There was so much more that happened that isn't pictured here... the hotel was insanely gorgeous; I felt like a celebrity! In the hotel lobby was a parrot named Abby. Friday night we went to dinner at a sports bar so that we could watch the opening ceremonies of the Olympics. Saturday we had lunch/drinks on the porch of the back of the hotel with a gorgeous view of the ocean.. I had a peach smoothie.. it was sooo good! That night we went to a local fish restaurant and ate out on the pier.. I had stuffed salmon with mashed potatoes. SO good. That night we went back to the hotel and surprised Steve's dad with a cake that Shannon had made for his upcoming birthday.. we got him so good that when we got to his hotel room with the cake he was in his underwear already!
Sunday before we left the area we went to a frozen yogurt bar called Fuzzy Peach.. I loaded mine up with all sorts of goodies. Our flight home took off at sunrise, which was absolutely gorgeous. I couldn't even handle how beautiful being above the clouds was; I can't wait to fly again.
Not only was the vacation itself awesome, but sharing it with Steve was fantastic.

Speaking of Steve, we celebrated our one year anniversary August 7th. We did a weekend adventure; including going to see Blue Man Group, bowling, a trip to the Franklin Park Zoo, and dinner at a swanky fondue restaurant. 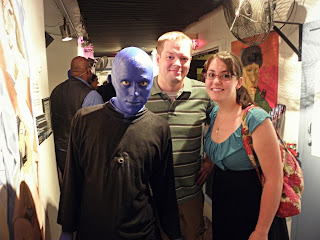 Right after seeing Blue Man! It was definitely one of the most interesting shows I've ever been to... Steve surprised me with the show! 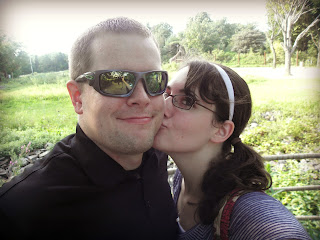 Steve and I in front of one of the viewpoints of the giraffe exhibit. I love him. <3 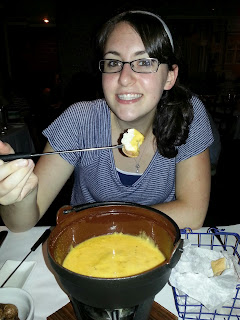 Steve took this picture of me at our fondue dinner. The food there was really good!

So as you can see, things are going well. I wish I could find a job, though. I'm really starting to panic about money. And on top of it, I'll never be able to move to Boston if I don't start getting some funds stowed away. The problem of not being qualified for much of anything and trying to avoid a job that would call for weekends makes a hell of a combo.. I can't even find anything to apply to! Hopefully something will fall into place soon.

I want to try and update this more. Hopefully since I won't be in school now I'll be able to do that more regularly, so the details won't be so limited.